Finally an Update - Thank You for Your Patience

I visited my blog yesterday and it brought me so much joy reading about our adventures in building The Floridian. So, why haven’t I written since March? That’s so long ago in the Internet age. Truth be told, several months ago my computer broke and it was all my fault. I carelessly knocked a glass of water into the side of my 2009 Mac. It took everything in my being to quell my anger and sadness; I purchased the Mac with my first paycheck from my first professional job after college and had taken good care of it for 6 years. Alas, Chip was extremely instrumental, and thoughtful, in taking the time to dry it out, then cleaning the internal components and watching lots of YouTube videos before it was, to my utter surprise, fixed. It comes to life (oh, trusty Mac), albeit a wounded warrior with a limp so it hasn’t been the same since. Hence, I’ve been avoiding my computer and the effects have trickled to my blog.

Reading my last few blog posts gives me renewed energy and so, with my limping computer, I start back up again. There are many things to discuss but let’s start with the exciting news: We’re moving out to our property! I’m super excited about living on our land but it, unfortunately, won’t be in the studio above a garage as there will be no garage, at least for the time being. There’s no garage because when we finally turned in our building permit paperwork the building official told us we couldn’t have two dwellings on the property (the house and the studio), so Chip and our drafter reworked the studio into a “man cave” by removing components from the kitchen to make it aligning the likes of a wet bar. Recognizing that Chip and the building official were perhaps not on the same page in understanding one another, he followed up with the official to confirm the conversation they previously had, way back in September, that we could move into the studio (now the man cave) before we start construction on the house and Chip got a resounding no. We were baffled. Why would we go through the trouble of building a garage with a studio and not move into it when we informed him we were owner-builders and building out-of-pocket and we previously asked him? Regardless of the email documentation we had, we knew the official would give us a hard time and it wasn't worth it.

Then, one day, Chip says, what do you think about buying a RV? I know we already decided against it but perhaps we need to reconsider it as an option. Sure, let’s do it, I say. We had hoped to be building by January and it was already April with no plans of building in the near future, so yeah, let’s make something happen.  The RV shopping commences and, one, I feel like a baller (because who shops for RVs? The rich! bwahaha) and, two, memories flood back of being eight years old again and thinking, oooohhh, I want to have a tea party with my tiny house and small kitchen drawers and an easy bake oven. Our price point puts a prompt end to my baller-vibe as we shop for RVs in the 10k price range, then increase it to 15k, still no-baller, until the price point sneaks up and we find a beauty at a dealership that will cost us $23,500 out the door. We realize things are getting out of hand and walk away from the deal to focus our energy on private sellers for increased negotiation opportunities and better prices. A couple weeks later we settle on a 2005 36’ fifth wheel for 17k. Buyers remorse is strong for Chip, that money could have gone to building the house, and the reality that I have to cook in a teensy tiny kitchen is deflating. We remind ourselves daily for the next week that we have to keep our eyes on the prize.

Here's a few pictures of our RV: 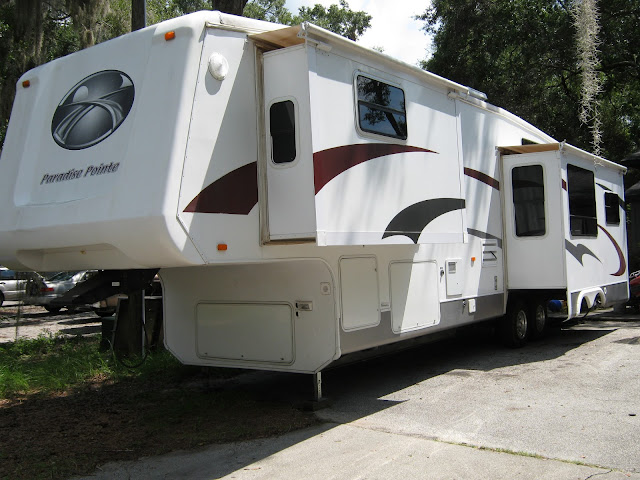 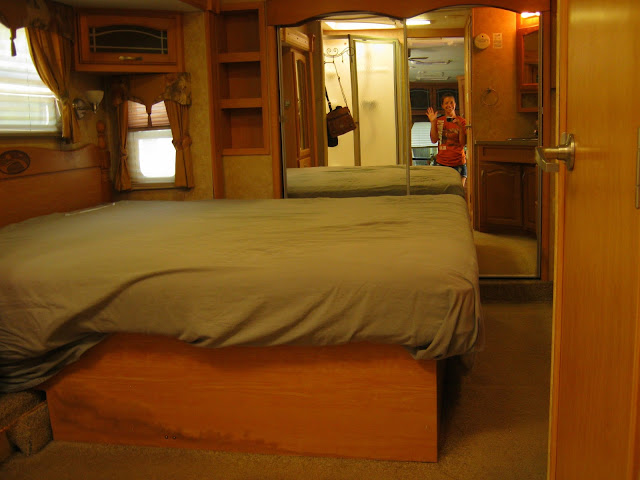 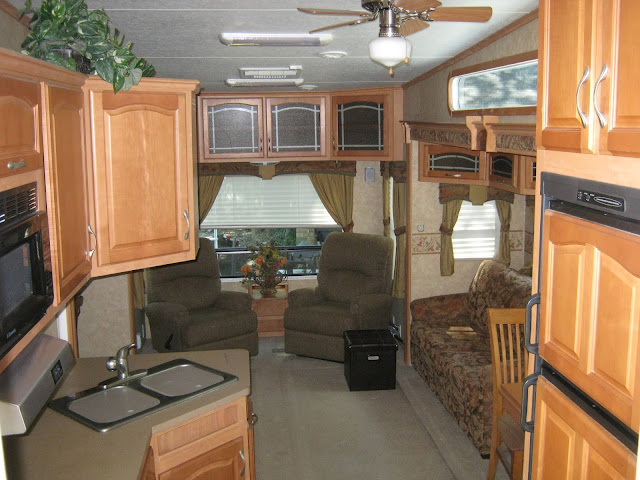 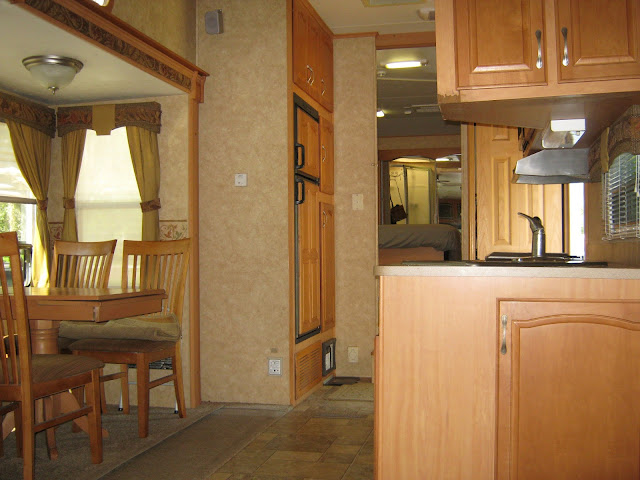 We’ve had the RV for about two months now and we’re a lot wiser to the shimmy sham RV world (in case we ever plan to buy another one again, which we don’t). What’s the shimmy sham? It’s that RVs are poorly constructed thereby needing constant care so they don’t fall apart. The main culprits - bad construction and water. The RV we bought had no water damage as the previous owners used it four times a year for weekend trips and had it covered when not in use. We took it for a preliminary trial run one night and it happened to rain like cats and dogs. Well, low and behold the roof was leaking and water was running down the interior side of the RV and then onto the floor. RV’s in our opinion are complete junk. We watched a few videos on how they’re made and it takes 6 hours to build a RV and our RV retails new for $56,000! That’s ludicrous. What’s more, eleven years later, the original owners sell it to us for $17,000 and they hardly used it. We’re going the get our money's worth on our RV because it’ll be our home for the next two years.