This past September, prior to Hurricane Irma, we broke ground on The Floridian. Whoohoo!! First inspection stage was to dig the footers - this is the square spaces in the ground and perimeter of the house that get dug for concrete to be poured. 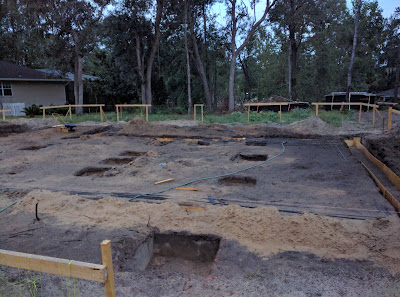 The Floridian is a stem wall foundation which means the house sits on pillars - like houses built in the olden days, with a crawl space. The thought of having our house suspended above the ground without a slab seemed scary at first but I've gotten used to the idea and realized that it's a common way to build houses and some of those olden-days houses are still standing today. Anyway, Chip wanted a stem wall for two reasons, one, so that he could easily access the plumbing and other items with ease. Secondly, a stem wall is needed for the look of the house (the design layout will be in my next post, so check back soon!).  With impending Irma, things stopped for a several days then we were back at it; well, really Chip was back at it. Building a house together and renovating are two completely different things, at least in my opinion and at this stage. Chip asks me to "dig over there and make it level" and I go "what that heck does that mean?! There's miles and miles of dirt and it's hot and I want to start preparing lunch and dinner and I need to give the dog a bath and I want to work on the birthday card for so and so...." If you know me, then you get the idea. We both concur that I'm a complete and total sour-puss when it comes to manual labor of this sort.  However, if given clear, concise instructions, with a end goal that I can see, then I'm golden (and as long as I have a book on tape ready to go). One day, Chip instructed me dig the 10 square spaces until they were 22" wide and level with the laser level (the best $350 ever spent!). I was on point that day, or so I thought - but apparently I move too slow (so Chip says) and on top of that, scattered bouts of rain forced us inside several times.
I am proud to say I was not a sour-puss that day and that contributed to the most manual labor I put into the first stage of building The Floridian. Meanwhile, Chip was a work horse day in and day out - turning each t-shirt into a wet rag with sweat, laying it out to dry then wearing it again until a wet rag for round two (I say gross! Chip says I don't want to dirty up another shirt. We do have a washer and dryer! Oh my goodness!).

Alright, enough talk about that. The footers were no easy task - we had quite a few trial and error situations. In the photo above notice all the bowed wood - Chip put up wood on both sides of the perimeter only to have the wood bow after it got wet. In addition, we spent several times renting a tamper - I even rented it once and loaded it up in my sedan. The staff gawked about putting it inside my car as it was smelly because of the gasoline but it fit and the sun was out and the windows rolled down worked like a charm. Anyway, the first two times the item was rented we weren't even ready to use it by the time it need to be returned and the last time Chip didn't realize the dirt turned to powdery, avalanche-inducing dirt when the tamper started jumping so we spent a night watering the foundation and then tamping the following day and resolved to pay for a fourth rental fee. The rental company was generous enough to not charge us for that one.

Once Chip was satisfied with the digging, then he set the rebar (reinforced steel bars) in place.
Then we were ready for our first inspection and Chip passed! I'm so proud of him. Our inspector gave him a nice compliment, stating the job looked professional. The next stage was quickly set in motion - concrete would be poured in 3 days time and cinder blocks and mortar would be delivered the following day!

P.S. After reviewing my post with Chip, he reminded me that I missed a big initial step: Excavating! Chip and his father spent a day excavated the site with the bull dozer. As The Floridian sit on a slope, areas of excavation in the front are about 3 feet deep with it tapering off to no additional excavation at the back of the house.

P.P.S Gosh, I'm missing more stuff! I didn't talk about layout - the truly first step. This means setting up what's called batter boards and stakes (i.e. 2x4's around the site) and stringing lines to determine where the excavation needs to occur and where the foundation and pillars will be. It must be noted, I did help here and contributed bobby pins to measure where our intersecting strings will be. A surprising, small thing occurred during this process - the dragonflies loved it! 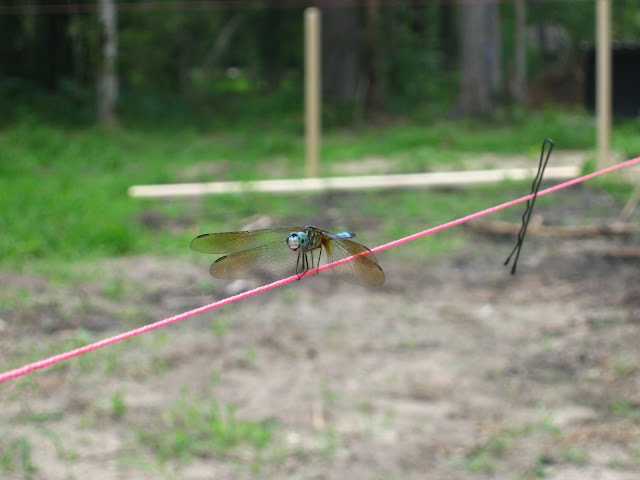