Laying the Foundation - The 2nd Inspection

A few days after passing the first inspection, concrete was poured. There are unfortunately no photos or video to document this step because I wasn't present (working the 9-5 gig). However, I can share photos I took after and tell you about the morning, per Chip's retelling of the days' events.

Chip enlisted the help of some buddies from work and hired a guy for the use of his concrete pump, this spreads the concrete around the various sections of the foundation.

The morning of, two concrete trucks show up and the rocks in the concrete were too large for the concrete pump. Chip sent only one truck back for concrete with smaller rocks and with the other purposely left on site (to make the most of their time) the crew set to wheel barreling the concrete into the designated spots. The guy Chip hired huffed and grumbled but surprisingly jumped right in to lend a hand and was a wealth of knowledge to boot. The second truck arrived as correctly ordered and the concrete pump was put to use and the guys, starting at 9am, finished by noon and spent the remainder of the day out on the lake. What a day!

The next day the block arrived. To Chip, laying block (masonry) is like riding a bicycle, once you know how to do it you’ll always know. That may be true but the reality is it’s laborious and tedious work; this part of the job requires exact precision as each block has to be straight, both vertically and horizontally. In layman's terms, when the floor is installed if you dropped 3 marbles on the ground they should roll naturally any which-a-way but if they all roll to one side then the floor isn't level and that's a problem. Over the next few weeks Chip lays block and his buddy, Austin, mixes the mortar. They are a good team and I'm grateful Austin is there to help as the work their doing is definitely not a one man job. 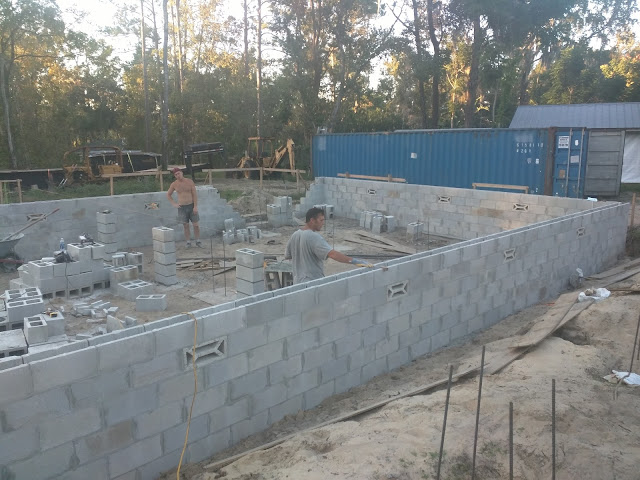